While all aquaponics systems have certain elements in common, there is a lot of variety in the ways in which these elements are combined. There are a number of different types of aquaponic system, each of which may be the best solution to implement in a given situation. To help you begin the process of deciding which system might be the best for you, here is a brief guide to the most common aquaponics systems:

The most simple form of aquaponics involves the use of beds filled with a growing medium. The best media for these beds and the depth required for optimal plant growth are hotly debated and will depend on your requirements, location and the other elements of your system. There are two main ways to introduce the water from your aquaculture component into these media beds – the first is to maintain a constant flow, the second, which we will discuss in a moment, is ebb and flow. Constant flow, also sometimes referred to as constant flood, has the advantage of requiring a smaller sump as, unlike the alternative, your system will not have to deal with fluctuating water levels. You may not even require a sump at all, though some say that it is a good idea to include on as this means you will not have to top up the water in the system as often. Another advantage of constant flow systems is that these are easier to expand and you can add a new bed to expand the system more easily than with an ebb and flow system. 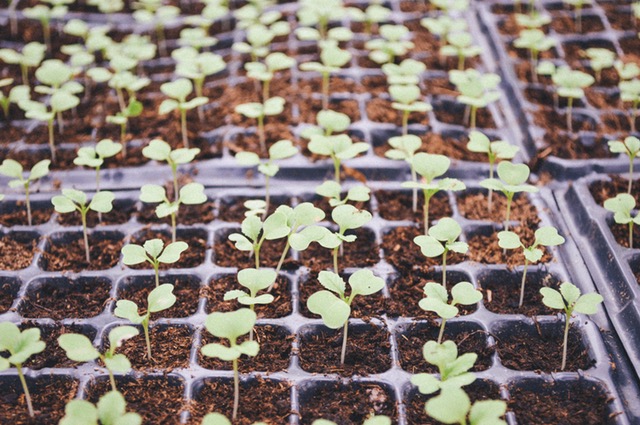 Ebb and flow (also known as flood and drain) systems are ones in which the water is pumped intermittently at certain intervals into the media beds. This system is said to be better at removing solids from the media beds and some say that intermittent flooding will introduce more oxygen to plant roots and to the water in the system. However, studies done into the differences between constant flow and ebb and flow seem to suggest that both systems have the same outcomes and which one you opt for will have little (if any) impact on the speed of plant growth or the efficacy of the overall system.

In aquaponic deep water culture (DWC), plants are not grown within a medium such as clay or rock as in the media bed systems described above but are instead floating on top of the water with their roots dangling into it. Rafts holding plants float on top of tanks or, more commonly in a commercial system, in channels down which the water from aquaculture tanks will flow. This system has the benefit that, due to the tanks or channels beneath the plants, more water is held within the system. This means that the nutrient solution will be more stable and the whole system will require less monitoring than systems where far less water is used in the loop. Once set up, these systems are pretty low maintenance.

One system of hydroponics which does use very low levels of water is the nutrient film technique in which crops are grown in lightweight drain piping/ guttering through which a thin trickle of water from aquaculture tanks runs. This form of aquaponics is only suitable for a certain range of delicate, leafy plants as other plants will be too heavy or have root systems that become too strong and invasive. For growing salads, however, this can be a truly efficient and sustainable solution.

The final growing method used within aquaponics systems is the wicking bed. Wicking beds are traditional raised beds filled with dirt that sit on top of a reservoir of water – this reservoir of water can be part of an aquaponic system. This type of bed can allow other vegetables to be grown as part of an aquaponics setup that could not be grown in other media or using the other methods above, such as root crops.

Educating yourself as to the pros and cons of each of the above systems is essential if you are to develop the aquaponics system that is right for you.